Highlights of the History of
The Palm-Aire Women’s Club

On April 30, 1958, a group of 17 women in Desoto Lakes decided to get together on a regular basis to promote friendship and enjoy social activities. They elected their first president, Frances Briddon, called their group the DeSoto Lakes Women’s Club and as the months passed, a state charter as a non-profit organization was acquired. On September 3, 1958, the first "Rules and Bylaws" were adopted and within two months membership had grown to 29. The group merged with women from the DeSoto Lakes Country Club Colony (now known as Palm Arie Country Club) in October of 1961. In January of 1964 the group formed the Palm-Aire Women’s Club.


Membership has grown throughout the years, at one time rising so high that it was necessary to rewrite the bylaws to cap membership at 325 active members. In today’s busy world membership averages 150, but the mission of the membership remains the same, to raise money for scholarships and charities.


Scholarships were originally given to students who had completed two years at Manatee Community College, now the State College of Florida (SCF) and were pursuing their bachelor’s degree. These Scholarships are given to students through non-endowed funds which the club established and contributed to throughout the years. Students may use their scholarships to remain at SCF or transfer to a different four-year university; however, they are required to maintain a high-grade point average. Since the spring of 2011 the Palm-Aire Women’s Club has also offered scholarships to Manatee Technical Institute, which is today known as Manatee Technical College.


In addition to scholarships, the club donated money and items to local charities each year. The Palm-Aire Women’s Club is proud to have supported several local charities throughout the years with cash donations presented at the May luncheon, Additionally, members have donated diapers and baby wipes, peanut butter, health kits and school supplies for the homeless, Christmas gifts and storybooks, and numerous other items to individuals in need.


The women of The Palm-Aire Women’s Club take great pride in their philanthropy but at the same time enjoy the camaraderie of the many wonderful women in the club. The luncheons are planned for the enjoyment of the members and are a relaxing way to spend Friday afternoons once a month. The Mix & Mingles are held informally at members’ homes to welcome new members and allow socialization among all. 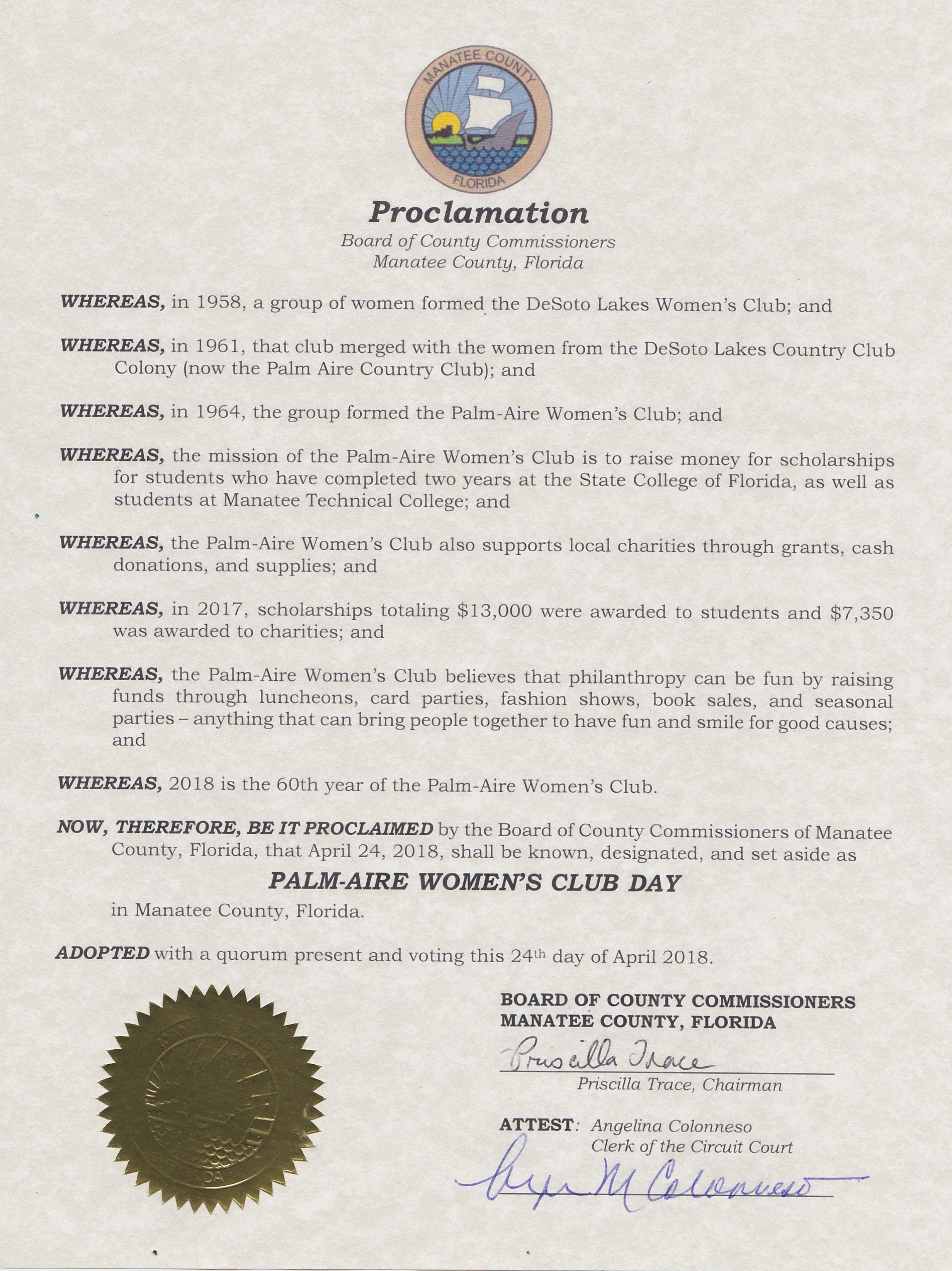